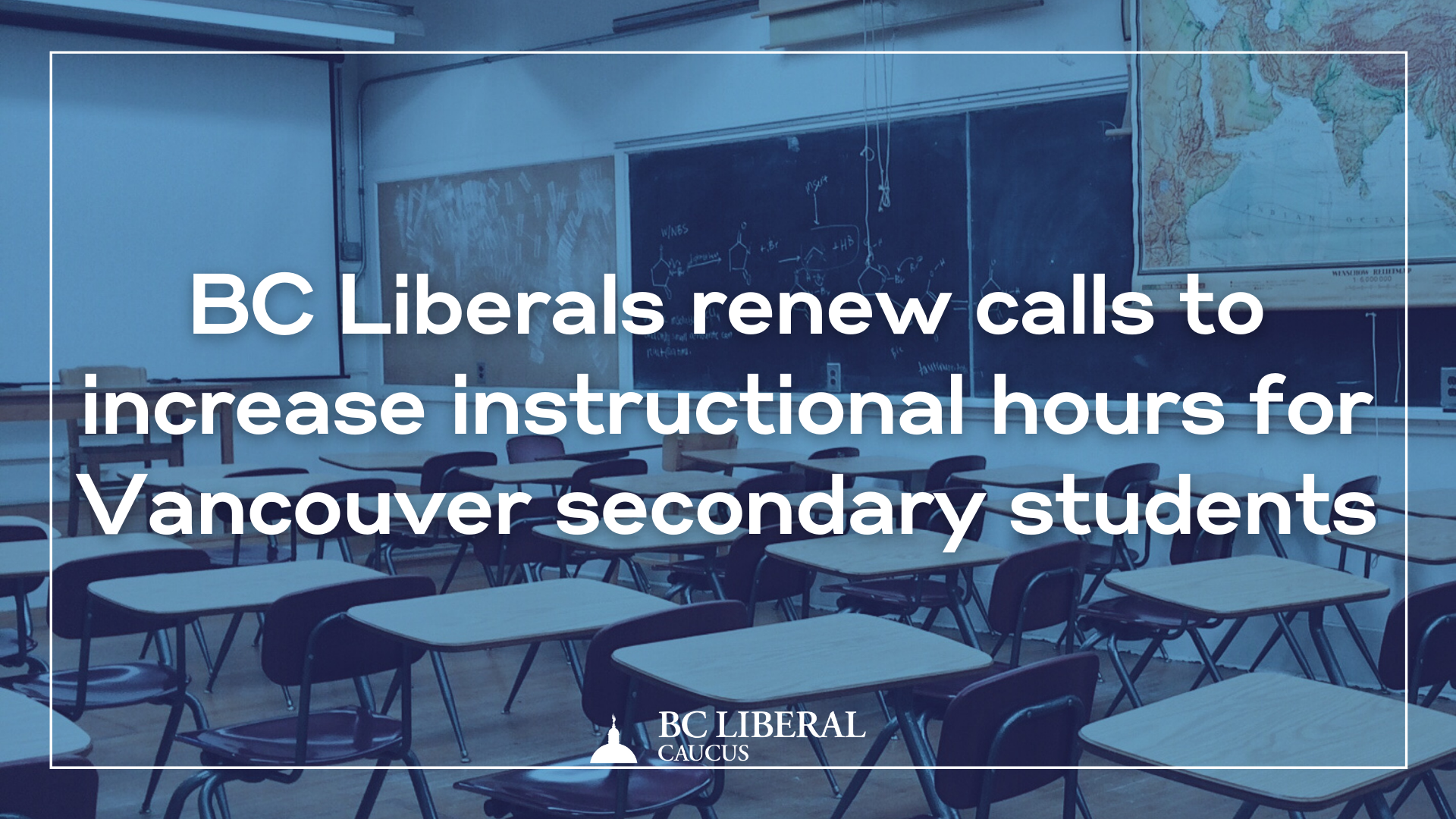 ASHCROFT (February 17, 2021) – Weeks after it was revealed that Vancouver students were receiving well below the number of instructional hours required by law, NDP Education Minister Jennifer Whiteside has yet to offer a response to families. “The Minister’s lack of action or even a response has been incredibly frustrating for Vancouver students and […]

VANCOUVER (February 17, 2021) – Despite promises to provide relief, Vancouver Island communities are still waiting on the Minister of Transportation to step in and provide support for local bus routes Tofino Bus and Vancouver Island Connector, operated by Wilson’s Transportation. “I wrote to Minister Fleming a month ago about the challenges facing motor coach […]

BC Liberals call for ministry intervention in Vancouver school hours

VANCOUVER (January 29, 2021) – Vancouver-Langara MLA Michael Lee and BC Liberal Education Critic Jackie Tegart are calling for action from the Minister of Education to address the growing concerns around decreased instructional hours for Vancouver secondary students. “I have heard from numerous parents about the dramatic cut to instructional hours in Vancouver secondary schools, […]

VICTORIA (January 15, 2020) – A report released today from the Canada Mortgage and Housing Corporation has shown vacancy rates in Metro Vancouver have remained virtually stagnant, despite assurances from the NDP that their faulty speculation tax and other tax measures would improve housing availability. “The NDP has repeatedly promised that it will solve many […] 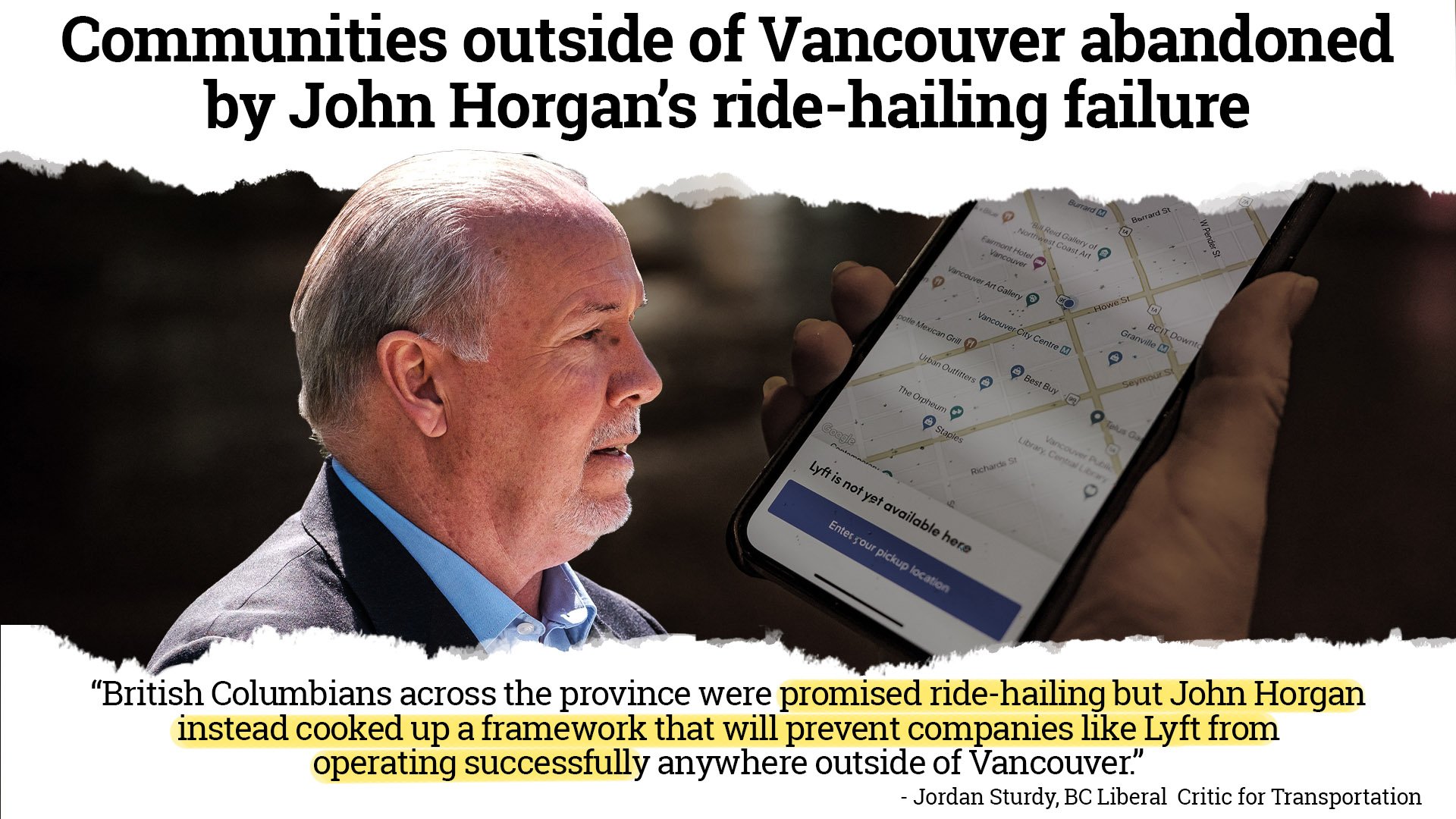 VANCOUVER (August 12, 2019) – The BC Liberals are calling out John Horgan and the NDP’s failure to introduce a ride-hailing model that can succeed outside of Metro Vancouver. “British Columbians across the province were promised ride-hailing but John Horgan instead cooked up a framework that will prevent companies like Lyft from operating successfully anywhere […]

VANCOUVER (August 2, 2019) – BC Liberal MLAs are joining Vancouver-Kingsway residents in demanding that John Horgan and the NDP focus on long-term solutions for homelessness in the community, especially around the Nanaimo SkyTrain Station. “Once again, we are seeing John Horgan and the NDP quick to throw money at modular housing projects without proper […]

Homelessness in Vancouver continues to rise, despite NDP promises

VANCOUVER (June 13, 2019) – The latest numbers from Vancouver’s annual homeless count show a 2 per cent increase in homelessness, despite John Horgan and the NDP’s numerous promises to turn the situation around. During the 2017 provincial election campaign, the NDP vowed to combat homelessness in British Columbia and build more affordable housing. Despite […]

NORTH VANCOUVER (September 7, 2018) North Vancouver – Seymour MLA Jane Thornthwaite has released the following statement on the eve of the Union of British Columbia Municipalities convention in Whistler: “One year ago, the District of North Vancouver submitted a proposal to expedite accident clearing. For too long, North Shore residents have been caught in […]

VANCOUVER (August 5, 2018) – Leader of the Official Opposition, Andrew Wilkinson, released the following statement today in celebration of Vancouver Pride: “This weekend Vancouver is celebrating their 40th Prideweekend. It is a momentous occasion, marking four decades of open celebration of LGBTQ identities in British Columbia. “Our society has come a long way since then, seeing […]