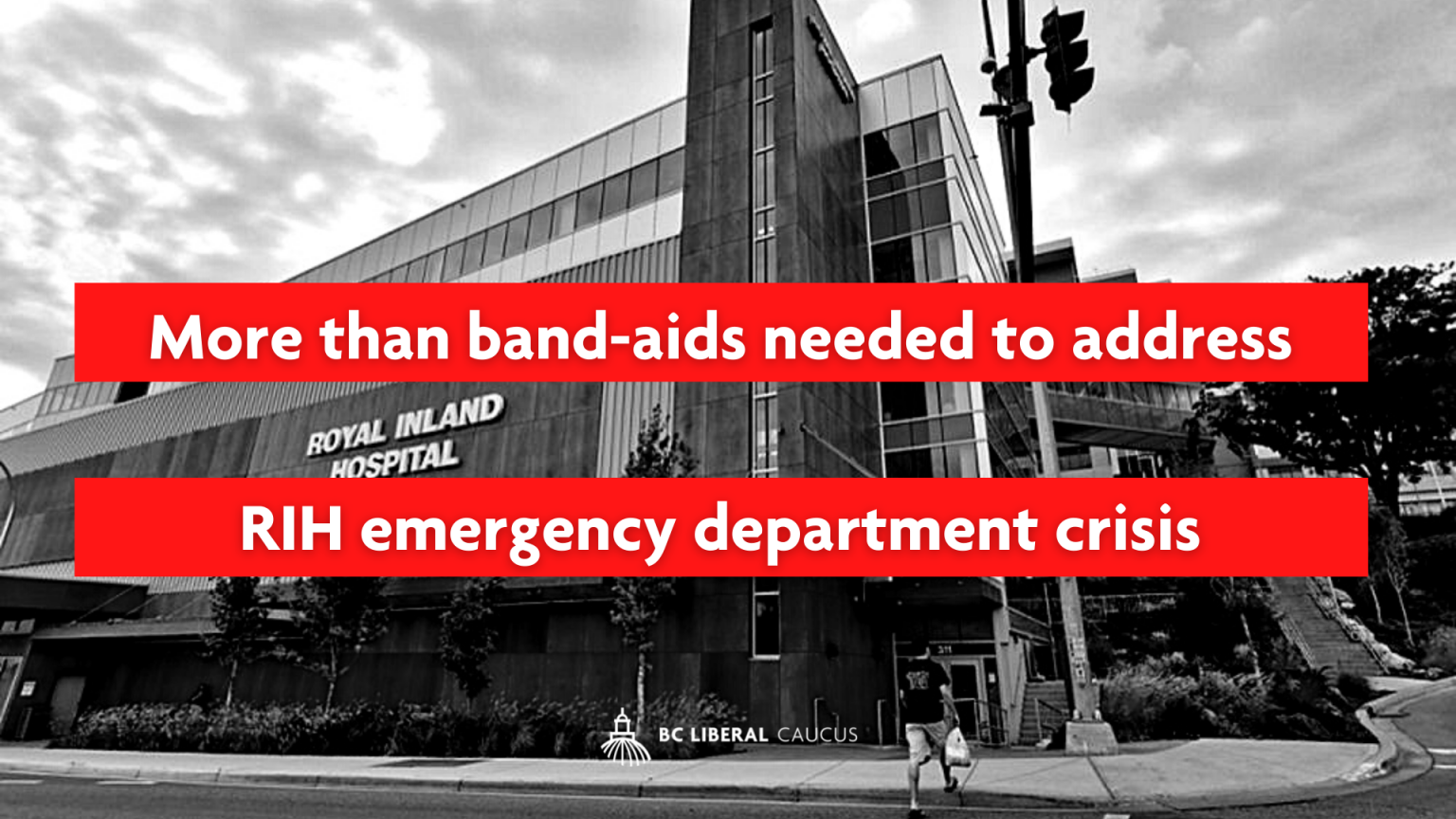 KAMLOOPS (September 13, 2021) – The BC Liberal MLAs for Kamloops are calling on Premier John Horgan and Health Minister Adrian Dix to take accountability for failing the people of Kamloops and surrounding communities, and to immediately outline a credible plan — with clear implementation dates — to address the growing staffing crisis at the Royal Inland Hospital (RIH) emergency department that is putting lives at risk.

“First and foremost, we want to say a heartfelt thank-you to all the health care providers at Royal Inland Hospital for their hard work, dedication, and professionalism, especially under these impossible circumstances,” said Todd Stone, MLA for Kamloops-South Thompson. “The government has let the situation at the hospital’s emergency department become dire — we’ve heard reports that some shifts have only three nurses trying to keep up with a workload usually handled by 13 people. This is not fair to our health care providers, who are being pushed to the point of exhaustion and burnout, and it’s not fair for patients who are now faced with unacceptably long wait times for care. Last week, we even saw a 70-year-old woman tragically pass away in an emergency department waiting room while awaiting treatment.”

Recent reports from Royal Inland Hospital suggest that approximately 25 per cent of emergency department nurses have left in the past few months, and 20 more have switched to casual work due to burnout, stress and a lack of reinforcements.

“The government has tried to blame COVID-19 and wildfires for the crisis at RIH, in an attempt to deflect attention from the fact they have failed to properly resource the hospital throughout their four years in power, culminating in the current crisis,” said Peter Milobar, MLA for Kamloops-North Thompson.

“The NDP opened a brand-new nursing building at Thompson Rivers University and yet they have not added any net new nurse training positions in Kamloops during their four years in power, despite there being more qualified applicants than positions available. Why have they not been training new nurses here in Kamloops to meet the demand?” added Milobar. “Additionally, the government’s Urgent Primary Care Centre at Royal Inland Hospital was supposed to alleviate pressure on the emergency department but has instead contributed to the closure of area walk-in clinics and a number of local general practitioner offices, forcing more patients to RIH’s emergency department. Staffing shortages at nearby rural hospitals have also added to these pressures at RIH. COVID-19 did not arrive last week or last month, rather the NDP has had 18 months to account for the stresses of the pandemic on health care delivery in the RIH emergency department, and they simply haven’t.”

“The government’s quiet announcement last Saturday of two additional emergency department nurses and vague references to temporary supports is too little, too late. It’s putting a band-aid on a gaping wound. Furthermore, it is appalling that neither the Premier, nor Minister Dix, have directly engaged with Kamloops residents, health care workers, or media to explain their failure and outline how they will fix these emergency department problems going forward. Rather than ignoring the people of Kamloops and the surrounding communities, as he did with the wildfire situation this summer, John Horgan should immediately come to Kamloops and be transparent and accountable to the people who depend on Royal Inland Hospital for timely care every day,” concluded Stone.

BC Liberal statement on National Day for Truth and Reconciliation

No metrics, no timelines in NDP health care strategy

VICTORIA (September 29, 2022) – The BC Liberals are raising concerns about the NDP’s newly released and overdue health human resources strategy, which fails to

ELKFORD (September 29, 2022) – It was one year ago today that Interior Health announced the ‘temporary’ closure of Elkford’s emergency room — yet there

B.C. the worst place in Canada to be a senior under NDP

VANCOUVER (September 22, 2022) – Following the release of a troubling new report from B.C.’s Seniors Advocate that highlights ​the failures of David Eby and