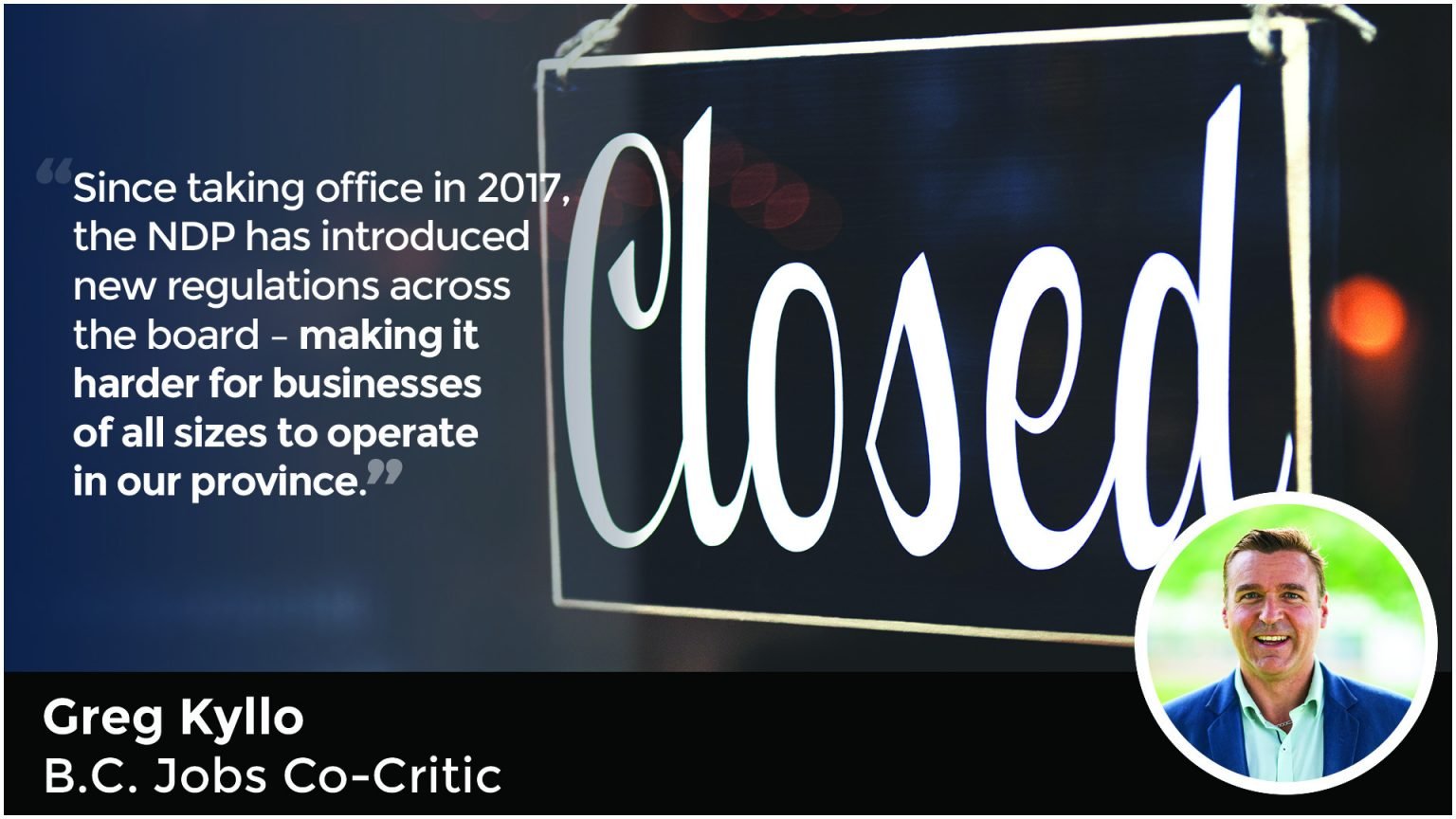 VICTORIA (January 23, 2019) – BC Liberal MLAs are cautioning that the NDP government has embraced a backwards attitude of increasing – rather than reducing – regulatory burdens in British Columbia, which is bad for business and our economy.

“Since taking office in 2017, the NDP has introduced new regulations across the board – making it harder for businesses of all sizes to operate in our province,” says Shuswap MLA and Jobs Co-Critic Greg Kyllo. “In particular, measures like the new Employer Health Tax and Community Benefits Agreement highlight the NDP’s problematic approach to the issue.”

The Employer Health Tax replaces MSP premiums with a levy on employers – which is complex to administer, particularly for small businesses with limited resources. Business owners also worry they will need to lay off staff, restrict hiring, cut back on staff benefits, or increase prices for customers to cover this new tax. Under the NDP’s Community Benefits Agreement, anyone working on a public-sector project will have to join a select trade union – making it more difficult to hire workers for these projects.

Richmond-Queensborough MLA and Jobs Co-Critic Jas Johal says business owners have told him they are finding it increasingly difficult to attract and retain workers in B.C. New regulations in areas like childcare and housing will only add to this challenge.

“The Speculation Tax is a prime example of an unnecessary bureaucratic burden,” says Johal. “Not only will this tax not improve affordability, but all homeowners in large urban centres will have to prove to the government they actually live in their home. If they’re away from their home for work, medical, or family reasons, they’ll have to prove that too. I can’t see this being a selling feature for relocating to British Columbia.”

“Rather than allowing professionals like engineers, geoscientists, and biologists to do their jobs, the NDP has created new positions to regulate these regulators,” says Oakes. “Not only is there no evidence to suggest this is necessary or helpful, but this practice will drastically increase costs, delays, and uncertainty across the sector as a whole. It’s no wonder the B.C. Chamber of Commerce is reporting 49 per cent of B.C. businesses surveyed say their confidence in the B.C. economy has declined this year over last. Northern business confidence in particular is down 10 points from last year.

“Meanwhile, for the first time ever, B.C. has lost ground in the CFIB’s annual Red Tape Report Card as a direct result of weak NDP political leadership. This year marks the 10-anniversary of the CFIB report that grades provincial governments across Canada, and in another dubious first, B.C. under the NDP now ranks below three provinces.”

Oakes notes the former BC Liberal government was working to make B.C. the most business-friendly jurisdiction in Canada— but sadly, the NDP is fast reversing those efforts.

NDP moves quickly to put up barriers to transparency, accountability

VICTORIA (November 29, 2021) – The NDP have acted swiftly to keep public information hidden and have already started charging the public for Freedom of

BC Liberal statement on Hanukkah

The Legislature may adjourn temporarily, but NDP inaction is forever

VICTORIA (November 25, 2021) – With the third sitting of the Legislature under John Horgan’s majority NDP government adjourning until February, British Columbians have seen

VICTORIA (November 24, 2021) –   Despite a promise by the Premier not to download the costs of paid sick leave onto businesses still struggling from